Back Pain and Ibuprofen

For someone with psoriatic arthritis, painful joints are just a part of life. We do what we can to cope, to extend the life of our joints and to reduce the aches and pains.

About the same time that I was diagnosed with psoriasis, I was also feeling awful pain in some of my joints and a serious reduction in mobility in my knees. I had not heard of any connection between psoriasis and arthritis (not that I had ever heard of psoriasis either) and did not even mention painful joints to the dermatologist.

I put my painful knees down to the fact that in my teens I had surfed many times in water that was below 10C (50F) without a wetsuit. I sometimes could not straighten my legs when standing up after catching a wave because my knees had seized. This was before short surboards, so we knelt on them and I had massive surf bumps on my knees and feet. When my knees started giving me problems 15-20 years later I naturally linked the two. During that intervening 15-20 years I had a click in my right knee at every step, so expected that knee to have limited life. Eventually it deteriorated to the point that I could no longer bend it past 45 degrees.

It was about that time that I first heard about glucosamine and condroitin, starting to supplement with that. It provided slow but steady improvement and I found that the formulations that included hyaluronic acid worked best for me. Over many years my joints improved so much that now, 25 years later, I can bend  my knees 180 degrees. I sometimes have some pain in my hips and I regularly have pain in my spine at about the level of my lower ribs.

I refuse to let either psoriasis or arthritis control my lifestyle, so I am a very active person, considering that I am now 63 years old. I surf whenever I can and I sail a very athletic dinghy that few guys much younger than me are happy to sail by themselves as I do. 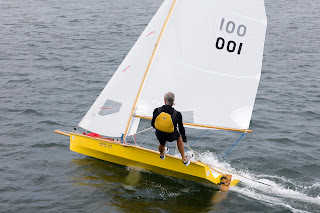 Me on my Paper Jet dinghy. Billy Black photo

When we lived in South Africa and were surrounded by mountains, I took my dogs for long strenuous walks up the mountain at least 3 times a week. I sailed 4 trans-Atlantic races, including one in which I cracked a rib half-way through the race and immediately followed that with another trans-Atlantic race without any healing time between the two voyages. I know that I have been rather abusive to my body but on the whole it has tolerated me pretty well. I regularly strain it past what it likes and it tells me so in the form of muscle and joint pain.

Two years ago I was trying to free up the seized engine of a classic British sports car that I am rebuilding. I wrenched the muscles alongside my spine and the chiropractor ordered me into a back brace and not to surf or sail for a month. Not being one to take orders well, I was back to sailing and surfing 10 days later.

Since then I have built a large shed single-handed and done various other projects that involve heavy lifting. The current job is extending the wooden deck in our back garden. I have found that it is the heavy lifting that does the most damage. I know that I am guilty of pushing myself too hard at times but that is how I get things done.

A few weeks ago my back started giving me more pain than normal and I also started to feel intense pain running down one leg, which I figured to be my sciatic nerve being pinched by a herniated disk. The pain was excruciating, so I decided to fall back on ibuprofen for some relief. I did not want to do that because I found from very early on that ibuprofen affected my psoriasis very badly, and so it did this time too. However, I was in lots of pain and all that I wanted was to get more comfortable. I consider ibuprofen only as a short-term solution because of the bad side-effects so I seldom resort to it.

Within a day I was starting to itch and another day later I was starting to flake on my elbows and the other small patches of psoriasis that I have. The pain did reduce considerably and I was able to think more clearly again, so I started to rationalise what was causing the pain. I figured that I had done too many things that were compressing my spine and needed to do some things that would stretch it back toward where it should be. I also needed to dislodge that pinched sciatic nerve from wherever it was stuck and causing the worst pain.

In South Africa I had a trapeze bar that I would hang from by my knees, upside-down. I would do that for 15-20 minutes a day, to good effect. I have not set up a trapeze bar in our current home but last week I tried a different solution. I bought a basic exercise bar that hooks onto a standard door frame. I hooked that onto the frame of one of the spare bedrooms, where it can stay as long as we don't have guests. Almost every time that I walk past that door the bar catches my eye and reminds me to stop for a few seconds and hang from it.

The benefit was almost immediate. I hang from the bar with my arms bent at 90 degrees and pull up my legs at 90 degrees, with my knees bent. While hanging like that I turn my legs to left and right a few times, twisting at the waist. Within one day the sciatic pain had completely disappeared. I still have the normal arthritis ache in my spine but that is bearable and I hope that it will also reduce as the hanging stretches my spine back to its proper length and allows the disks to decompress. I expect this to reduce the friction between adjacent vertebrae for long-term benefit.

I will keep at this tactic and see how much benefit I get from it. The initial response encourages me to make myself a new trapeze bar so that I can hang upside down again. I expect that will be of more benefit for lower back pain than the exercise bar.

The main aims of this post are to encourage you to stretch your spine if you have back pain of any kind and also to stay away from ibuprofen as a long term solution. My skin took a few days to return to its previous state after I stopped the ibuprofen.

I will continue to use it as a short-term pain solution, which will probably be each time that I do something that is both physical and incredibly stupid.
Posted by Dudley Dix at 6:41 AM

I have lived with psoriasis since about 1985, so I have a long personal experience with the condition. The purpose of this blog is to pass on some of that experience, the successes and the setbacks, in my self-treatment of this condition.